Why Hotels Need to Convert to LED Lighting 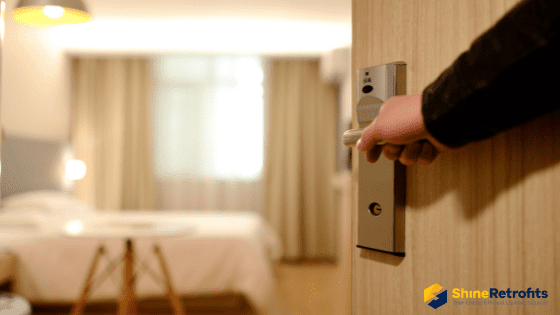 Of all the businesses that exist within the service industry, hotels use incredibly high amounts of energy, especially on lighting. This high energy usage can be attributed to the day-to-day operations of a hotel, which requires many lights in the building to be kept on at all hours. With hundreds, and even thousands, of lights under constant use, operating a hotel with wasteful lighting fixtures can cost the hotel lots of money down the line.

Because of this, any hotel would greatly benefit from making the switch to LED lighting. Many of the big hotel chains have already begun switching the lighting in their older hotels to LED, as well as equipping many of their new builds with cutting-edge LED fixtures This industry trend has been further exhibited by the LED renovations undergone by hotels like the W Los Angeles, and popularized by hotel design firms such as The Gettys Group.

Shine Retrofits aims to make switching to LED lighting in your hotel, motel, bed and breakfast, or commercial lodging operation as simple and pain free as possible. We do this by supplying quality LED lighting products for a wide range of hotel applications, from efficient hallway lighting to moisture proof fixtures for pool rooms and locker rooms. We can help you light areas such as your lobby, conference room, and dining room with powerful, dependable LED lighting that will last a long time and save you a lot of money in the process.

We’ll guide you through some of the most convincing reasons that hotels need to be making the switch to LED lighting, as well as show you how easy it is to transition to the technology. By the end of this article, we’ll hope that you’ll see the positive impact that LED technology can have on your business and the hotel industry as a whole.

In the hotel world, efficiency is the name of the game. Functions such as getting the rooms cleaned and turned over, checking guests in and out, as well as assisting them with a number of other tasks, need to be accomplished in a time-effective and efficient manner. The same rule goes for a hotel’s lighting, which needs to be efficient to cost-effectively light the guest rooms, hallways, lobby, and many other areas of the hotel.

The savings with LEDs begin right after you install them. When compared with incandescents and fluorescents, LED bulbs are several steps above in efficiency. For example, an LED can use as much as 75% less energy than an incandescent bulb would with the same light output, which over time amounts to quite a bit of money saved. When you insert these numbers into a high-use scenario like a hotel, the savings can be even higher.

And this isn’t the only way that LEDs save you money. Many LEDs last somewhere between 50,000 to 100,000 hours, which is a significant improvement over the lifespan of more traditional lighting technologies. This means that you’ll not only save money on your energy bill, but also on paying for replacement bulbs every 2000 hours, the highest lifespan of any incandescent bulb. Even fluorescents don’t last as long as LEDs, topping out at a 36,000 hour lifespan at best.

Though LEDs usually cost more upfront to purchase, in the long run the cost will be lower. The higher price of the LEDs will quickly be offset by the lower prices you’ll pay when operating your lighting. After a very short period of time, making the switch will save a lot of money.

LEDs Can Help With Hotel Design

Because LEDs are so efficient, you can install them as part of design applications you would never consider using traditional lighting in. The long-lasting power of LEDs allows you to install accent lighting in high ceiling areas or other hard to reach spots without the pain of knowing you’ll have to replace the bulbs very often. It also helps that LEDs come in all different sizes - from tiny diodes to large fixtures - which opens up whole new worlds of interior design and lighting strategy.

For hotels looking for new design options, LEDs can be a great tool. The options and applications for LED design are endless, and will most likely spur some new, creative ways to approach your hotel layout.

If the upfront cost of LEDs is something that is holding you back, you can also consider investing in LED retrofit kits. An LED retrofit kit allows you to upgrade your existing fixtures to support LED bulbs. Not only does this save you the upfront cost of buying brand-new fixtures for your hotel or business, it also allows you to leave your current lighting design layout undisturbed in the process.

For hotels this is an effective option because of the high number of lights that would need to be replaced when making the switch to LEDs. By investing in an LED retrofit, you can lower your costs while also enjoying the energy-saving benefits of the technology.

LEDs Give You A Wide Range of Color Options

LED technology has come a long way in the last few decades. Back when they were first developed in the 20th century, LEDs were prohibitively expensive to buy. This, along with a multitude of other reasons, kept them from initially becoming a viable lighting alternative. In the early days, LEDs only came available in red, with more colors slowly developed over the next few decades.

It wasn’t until scientists were able to create a truly “warm white” LED that the technology truly became viable for commercial and residential use. Fast forward to the present day, and switching to LEDs comes with an almost identical selection of colors that you’d find with incandescent or fluorescent bulbs. When purchasing your LEDs, you can choose between crisp, cool light that is good for offices and gyms, as well as warmer, yellow-white light that is perfect for break rooms or lounge areas.

Hotels include a wide range of areas that require either warm or cool lighting (and often somewhere in between). When a hotel is switching to LEDs, they won’t have to worry about sacrificing the lighting color design they’ve already implemented in certain rooms and areas. Oftentimes, with the power of LED technology, they can improve on it. Many modern LED bulbs can adjust their color as the day goes on, giving you new realms of flexibility when it comes to your lighting.

LEDs Give You Powerful, Bright Light

It’s good news that LEDs are efficient, but it’s great news that LEDs are powerful as well. For outdoor areas and big conference rooms, the bright and efficient light that LEDs give off can be a lifesaver. Walking paths or parking garages that once cost hotels a big chunk of change to illuminate can now be covered by powerful light for a fraction of the cost.

Also, LED lights never flicker, so you don’t have to worry about that issue annoying your guests. When LEDs fail, they usually start to dim a little bit, which is much less annoying than a flickering lighting in a hallway.

If you have any questions about switching to LED technology, or on what kind of lighting is appropriate for your hotel or business, we’d love to help. Our team of lighting experts at Shine Retrofits can walk you through the process of buying new LED fixtures or retrofits for your project, and can help you pick out the right product for you. Please call our customer service team at 1-877-914-2218 anytime Monday through Friday, 6am to 6pm, Mountain Standard Time. We can’t wait to hear from you!