LED Tubes: Should I Use Them To Replace My Fluorescent Lights?

In short, YES! LED lighting technology has come to a point where the efficiency makes it hard to justify keeping your old fluorescent or incandescent bulbs in place. Even though the initial replacement costs to choose tube LED tubes will be higher, you will see energy savings that will pay for those up front costs within 2 years in most cases. New linear LED tube bulbs are simple plug and play and ballast compatible. You will simply need to remove your fluorescent bulb and plug in your LED replacement.

Read on for more info to support your decision to replace your linear fluorescent light bulbs with tube LEDs. 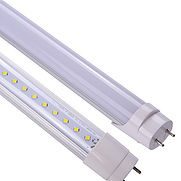 Replacing fluorescent lights with LED has never been easier, with LED tube lamps like this one from LEDOne for as low as $11.99/ea.

LED replacement lamps are on average 30% more efficient than their fluorescent counterparts. That means if you are spending $10,000 on your lighting energy costs per year, your bill will be reduced by $3,000 or more, every year that you use the LED bulbs. Standard 4-foot T8 LED bulbs are available at as low as 12 watts of power consumption, while their fluorescent counterparts will start at 25 watts.

One of the big reasons why an LED is more efficient is because it only emits light in one direction. The light emitting diodes(LEDs) are all arranged along the bottom of the lamp and send light downwards. Fluorescent lamps emit light in all directions, including up towards the ceiling where it is not needed.

Have you noticed that many LED fixture have a lower lumen output than fluorescents? That is okay and is because LEDs are directional. They only emit light in the desired direction.

Some linear fluorescent lamps are now rated to last up to 84,000 hours, while the average life of a fluorescent tube lamp is only 30,000 hours. That is over twice as long, so keep that in mind when you are calculating your purchase. The LED lamp is more expensive, but you will need to replace your fluorescent bulbs 2 or 3 times during the lifespan of an LED. Keep in mind the labor costs of replacing those fluorescent bulbs, particularly if you are lighting a large warehouse.

The ability to dim your lights increases their efficiency, because you will only be using the wattage necessary for the amount of light that you require. Most fluorescent lights have two settings, ON and OFF. That means that even if you only need a little bit of light, you still need to operate at full power consumption. Some expensive fluorescent bulbs are dimmable with a special ballast, but at that point your cost is comparable to an LED option. 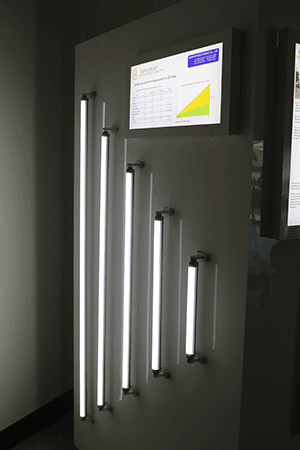 Have you ever picked up a fluorescent lamp that dropped on the ground? If you did it was probably with a broom and dust pan. Fluorescent tube lamps are notoriously fragile, and their LED counterparts are just the opposite. They are built with a durable plastic housing that should even be able to withstand a drop from a low height.

Your air conditioning bill may go down as well

A great way to improve efficiency in your warehouse or other space is to install occupancy sensors. This ensures that light will only be produced in areas where someone is present. Unfortunately, this can have a big impact on the life of your fluorescent lights. Each time you turn on a fluorescent bulb, a small amount of a mercury vapor is burned off. Once that is diminished, the bulb will no longer work. On the other hand, the life of an LED bulb is not affected by the number of times it is turned on and off.

Installation is just as easy

Many LED tubes are "plug and play", meaning you can just install them like you would a fluorescent bulb. For this to be true, look for bulbs that are "ballast-compatible" meaning that they can use the ballast already installed in your fluorescent fixture to power the LEDs.

The time has come for fluorescent lamps to step aside. LED technology has overcome their efficiency and affordability. Simply put, if you want to lower your energy demands, switch your linear light fixtures to LED!

If you don't have fluorescent fixtures and need to install new lighting, tube LEDs may not be the best choice. It is often more efficient to install a fixture with built in LEDs that will not require bulbs. You can shop for those on ShineRetrofits.com here.