The Real Cost of Postponing Your Retrofit Plans 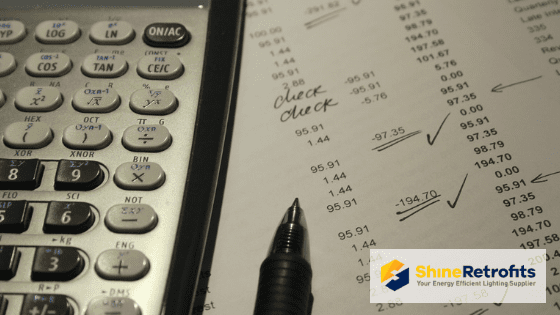 Have you been considering a retrofit for your office, warehouse, or other commercial space for quite a while? We know that there are a lot of factors that go into making such an important decision, such as upfront cost and the time spent researching and ordering materials you’ll need to complete the project. These details, as well as the confusion that might come into play when figuring out your retrofit plan, can often delay a project indefinitely, especially when you already have your plate full of work projects and other responsibilities.

Though we understand how these concerns and problems can lead to a delay in your retrofit project, we also want to stress how important it is do a retrofit sooner rather than later. You may think that a project like this can wait, but by doing so you’re cheating yourself out of saving money. The benefits of retrofitting your existing fixtures with LED technology only compound over time, which means that the sooner you change over your lights, the sooner you’ll experience savings on your energy bill.

To understand why you should make an LED retrofit one of your top priorities, you have to understand the real cost of your lighting system versus the upfront cost. That way, next time you’re looking at lighting options online, you aren’t tempted by the seemingly cheaper options in front of you and end up losing a lot of money in the process.

The Upfront Cost of a Retrofit Project

When it comes to lighting and the products you see available in today’s market, there’s no doubt that LED is the most expensive option when making an initial purchase. LED bulbs can often cost as much as 8 times that of a similar incandescent bulb, which are generally cheaper to produce than their LED counterparts. Though this may seem like a good deal when you’re at the store or online scouring through product lists of bulbs and lighting fixtures, in the long run it’s actually a bad bet.

The Real Cost of Lighting Technology

When you dig deeper on lighting cost, what you discover upon buying a cheaper bulb is that you’re paying for it in the long run. That’s why we want to talk into doing your LED lighting fixture retrofit as soon as possible, because we know you’ll regret not doing it sooner. Every day you use energy-wasting technology is another day you could be saving that money by making the switch to LED. The upfront cost of investing in LED technology is quickly eclipsed by the massive energy savings you’ll experience by lighting your spaces with LED lights.

If you still feel a little hesitant about making the switch to LED lighting, it can be helpful to crunch the numbers and see just how your lighting costs will play out in the long run. That way you’ll know that you’re not just following a new lighting trend or trusting a vague gut feeling. Seeing how the savings of an LED retrofit play out alone should be enough to convince you.

Running the Numbers on an LED Retrofit

Let’s draw out a quick example for you by comparing a few different lighting technologies. There are quite a few different ones available, which can be quite confusing when thinking about upgrading.

The Simple Dollar recently compared three different lighting technologies in order to find out the real cost of using various types of lighting for your spaces. The technologies they compared were incandescent, CFLs (Compact Fluorescent Lights), and LED. At the top of the diagram, they listed the approximate cost per bulb for each light. Incandescent bulbs were very cheap, about $1 per bulb, while LEDs were up to eight times more expensive at $8 or less for a bulb. CFLs were almost as cheap as incandescent at $2 a bulb.

Then they listed the watts used and average lifespan for each bulb. The incandescent used a whopping 60 watts while the CFL came in at 14 watts and the LED at 10 watts. But even more disparate was the average lifespan, with incandescent lasting 1,200 hours compared to 25,000 hours for the LED bulb. That means for 25,000 hours of use, you’d need 21 incandescent bulbs for the same amount of time that you’d need a single LED one. Suddenly the cheaper bulb doesn’t seem as good of a deal when you consider the fact that you’ll be spending $21 over the same time you’d spend $8 for LED.

The comparison gets even more interesting when you compute the cost of operating the bulb. Over those 25,000 hours of use, the incandescent bulb will use $180 dollars of electricity at $0.12 per kWh. Over the same time and at the same cost per kWh, the CFL will cost $42 and the LED will cost $30. When you add the operational cost to the purchasing cost over the 25,000 hour time period, the results are staggering. Using a traditional incandescent bulb will cost you around $201 compared to $48 for a CFL and $38 for an LED. That means the real cost of buying the cheaper bulb is actually much, much higher, and will cost you a lot of money in the end.

Plus, this example only takes into account the savings you’ll experience with one bulb over a certain period of time. When you factor in equipping your whole business or commercial space with LEDs instead of traditional incandescent lights, the amount of money you can save is absolutely staggering. Also, the more time you use LEDs instead of less efficient lighting, you’ll save increasingly more money over time.

Helping You With Your LED Retrofit

Along with the energy savings you’ll experience by switching to LED, there are benefits like increased lighting quality and cutting down on maintenance costs in your business. We wouldn’t be espousing how great LED lights are if we weren’t true believers. We’re here to help you save money and buy quality lighting, and LEDs really do give you the best of both worlds.

The good news is that you now have the knowledge and motivation to get your LED retrofit finished as soon as possible, and Shine Retrofits is here to help you. We have an extensive list of retrofit kits, LED bulbs, and LED light fixtures available for you to purchase. If you have any questions about our catalog or about which lighting product is right for you, our team of lighting experts are standing by to help you. Cal 1-800-983-1315 anytime Monday through Friday, from 6am to 6pm Mountain Standard Time, for help getting started with your LED retrofit today. We can’t wait to hear from you!