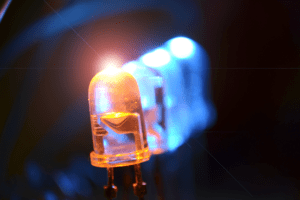 The history of LED lighting shows that light emitting diodes were first available in the 1950s as indicator lights. source: Wikipedia

Light-emitting diode (LED) is right now the most energy-efficient lighting technology available for use in commercial and business purposes, and it is only natural that it is also one of the most rapidly-developing technologies. LED is a kind of solid-state lighting where a semiconductor converts electricity to light (without producing heat) usually in a small area of about 1 square millimeter or less (the diode). So in an LED lamp, there are actually multiple light-emitting diodes. The light that generates from an LED projects in one direction, which does away with the need to use diffusers and reflectors.

The Development of the Concept of Electroluminescence

The history of LED lighting begins with the discover of electroluminescence. The concept of electroluminescence lies at the heart of the development of LED lights. In 1907, Henry Joseph Round observed this phenomenon in Silicon Carbide. However, the yellow light emitted was too faint to be of any real use. No further research was conducted into this phenomenon then. In 1920, Bernhard Gudden and Robert Wichard Pohl used Zinc Sulphide with Copper to replicate the phenomenon.

But once again, the light emitted by this material was too faint to be of any practical use. Research again stops on this phenomenon. The term “electroluminescence” was coined by George Destriau in 1936 when he published a report on the phenomenon of light being produced by Zinc Sulphide powder when electric current was conducted through it.

In 1961, Robert Biard and Gary Pittman invented an infra-red LED while they were working for Texas Instruments. However, this light did not have any practical use because it was invisible to human beings. This was an accidental invention because Biard and Pittman were actually working on a laser diode.

Experimenting with the use of the semiconductor Gallium Arsenide that had started during the 1950s subsequently led to the development of the very first LED with practical use. In 1962, Nick Holonyak, Jr. invented the first LED that could produce visible red light. He invented these red diodes during his employment with General Electric. For his achievement, Holonyak has earned the title of “Father of the Light-Emitting Diode.”

Experimentation with the type of semiconductor that could produce more efficient LEDs continued throughout the 1960s. In the early years of this decade, LEDs were made using Gallium Arsenide Phosphide on a Gallium Arsenide substrate. Using Gallium Phosphide as the substrate increased the efficiency of the lights and brighter red LEDs came into being. Soon afterwards, orange LEDs begin production.

The History of LED Lighting In Mass Production Begins at Monsanto

In 1972, M. George Craford of the Monsanto Company used two Gallium Phosphide chips—one red and one green—to make LEDs that emitted a pale yellow light. Incidentally, Monsanto Company is the first company to produce LED lights on a large scale and for mass consumption. Craford also invented an LED that emitted about ten times brighter light than Holonyak’s version.

During the mid-1970s, scientists started using only Gallium Phosphide to make LEDs that emitted a pale green light. These experiments resulted in improved versions of LEDs by the end of the decade. These LEDs could produce pure green light.

The use of LED lights became popular during this decade when Fairchild Optoelectronics began to produce low-cost devices.

The First Generation of Super-Bright LEDs 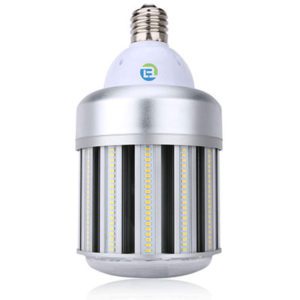 Continuous and intensive research and development work into the LED technology led to the development of the first generation of super-bright red, yellow, and green LEDs in the early years of the 1980s. In the early 1990s, scientists experimented with Indium Gallium Aluminum Phosphide as the semiconductor material to produce ultra-bright orange-red, orange, green, and yellow LEDs.

In 1994, Shuji Nakamura invents the ultra-bright blue LEDs using Gallium Nitride. Just afterwards, he develops high-intensity blue and green LEDs using Indium Gallium Nitride. These ultra-bright blue LEDs led the foundation for the development of cost-efficient and supremely functional white LED lights that are now commonly installed in commercial and manufacturing spaces, as shown in the image below. Scientists discovered that by coating the blue light-emitting chip with fluorescent phosphors, the diode could be made to emit bright white light.

The United States Encourages Development of the White LED

The results produced by the white LEDs were impressive, and the U.S. Department of Energy encouraged the development of the white LED technology keeping in mind the needs of business owners to light up their commercial spaces with cost-efficient solutions. The result is that today’s LEDs lights are six to seven times more efficient than the traditional incandescent bulbs. The LED lights use an impressive 80 percent less energy than their incandescent counterparts. They also last 25 times as long. LED lights are cost-efficient for installation on a large scale.

Meanwhile, research into LED technology continues. There are right now LEDs that emit pure violet and even ultra-violet “black” light. The increased energy efficiency of LED lights has prompted business owners to use these on a large scale in their offices, industrial operations, and commercial developments to invoke more cost-savings.

With your new knowledge of the history of LED lights, Shop LED Lighting Products Now