High-intensity discharge (HID) lamps have been around for more than 100 years now. In the early history of HID lighting, lighting experts refer to them as gas discharge chambers. HID light sources emit light by vaporizing metallic salts inside the electric arc chamber. HID lamps emit more light watt-by-watt compared to a conventional halogen-tungsten or a tungsten bulb. So a HID lamp smaller than a halogen lamp can produce an equal amount of light. That is why, commercial space owners who wish to reduce operational expenses and optimize their investment on infrastructure choose to install HID lamps in their premises.

The History of HID or Gas Discharge Lamp 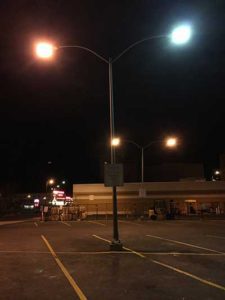 This post has a sodium vapor lamp on the left and a mercury vapor on the right, showing the green glow of MV. soruce: Wikipedia

The history of the gas discharge lamps dates back to 1675. It was then when Jean-Felix Picard, a French astronomer, notices that the vacant space inside his mercury barometer glows when he moves the device. However, it was Francis Hauksbee who later correctly explains the phenomenon. He first demonstrated the working principle of a gas discharge lamp in 1705. Then, he placed a little mercury inside a partially vacuumed glass container. He showed that when static electricity was supplied to the container, the mercury emitted a glow that was bright enough to let a person read by it.

These developments excited scientists in other parts of the world, and they began to research into the working principle of discharge lamps more earnestly. For instance in 1802, Vasily V. Petrov first explained the principle of an electric arc and Sir Humphry Davy in the same year demonstrated the phenomenon convincingly.

Heinrich Geissler, a German glassblower, is considered to be the Father of the Low-Pressure Gas Discharge Lamp. In 1857, he developed the Geissler tubes, which was a range of cold cathode tubes with different gases inside these that emitted lights of different colors. After researching into Geissler tubes, scientists discovered that inert gases (or gases that do not or only minimally react with other materials) like neon, argon, krypton, and xenon are suitable for Geissler tubes. Even carbon dioxide produced the desired results.

The History of the Metal Vapor Lamp

Arthur H. Compton at Westinghouse invented the low-pressure sodium lamp in 1920. However, his model was not commercially feasible because over time the sodium corroded the electrodes and coated the glass tube with a black film. In 1931, Marcelo Pirani improvs upon this design by using a type of glass that does not react to sodium.

However, the first low-pressure sodium lamp for commercial use was developed by Phillips in 1932. The lighting giant has never made public the names of the individuals associated with this development. The model by Phillip had a detachable outer jacket. There was vacuum between the glass tube and this outer jacket. The vacuum acted as an insulating layer that retained the heat of the bulb and prevented the sodium from solidifying. Low-pressure sodium lamps have been in use for street lighting since the 1930s. This is mainly because the yellowish light that emits from these devices could penetrate the fog and be visible over awesome distances.

Later on scientists introduced improvements in the above version of the low-pressure sodium lamp by Phillips. For instance, one version integrated the outer vacuum jacket with the discharge tube inside the bulb. This was a better design that also improves the insulating properties of the lamp. Another version of the low-pressure sodium lamp came with a coating of indium tin on the inside of the detachable jacket. This coating reflected the heat back to the bulb to keep it heated for long. This design proved ideal for use in cold climates.

From the days when the low-pressure sodium lamp was invented, scientists knew that a light with higher pressure will be more functionally effective. However, they were yet to discover a material that would withstand the high pressure and temperature and not be corroded by the sodium. Finally, in 1955, Robert L. Coble discovers Lucalox or aluminum oxide ceramic that works in high-pressure sodium lamps.

In 1964, Elmer Homonnay, William Louden, and Kurt Schmidt developed the first high-pressure sodium lamp using Lucalox. These lamps emitted a brighter whiter light and were ideal for use at road intersections, sport stadium, and tunnels.

A Brief History of the Metal Halide Lamp

Metal halide lamps, variations of the high-pressure mercury vapor lamps, emit more pure white light than high-pressure sodium lamps. In fact, some metal halide lamps emit light that simulates daylight. This quality makes these lamps ideal for use indoors, in “high bay” applications, and in outdoor settings such as stadiums or arenas.

In 1912, Charles P. Steinmetz experimented with halide salts placed inside a mercury vapor lamp. His intention was to make the mercury vapor lamp emit a more appealing color. He was successful in his quest but was unable to produce a consistent and stable arc. However, his works influenced other scientists to experiment more with halide salts to produce metal halide lamps that emitted a consistent and flicker-free light.

We credit Robert Reiling with developing the very first stable metal halide discharge lamp. In 1962, he improved upon Steinmetz’s design to produce a fused quartz metal halide lamp with molybdenum and tungsten sealed electrodes. This design could withstand the high temperatures generated by high-pressure mercury vapor lamps and proved to be more stable.

The development of the CMH lamp traces back to the Multi-Vapor Metal Halide Lamp. It is an arc lamp developed by General Electric in 1962. The first CMH lamp was exhibited to the world in 1981. It was shown during the Hannover World Light Fair by the Thorn Lighting Group. However, these lamps could not be produced commercially because they needed a special ballast to operate. It was Philips who introduces the first commercial CMH lamps in 1994.

High-intensity discharge lights have evolved significantly over the years. These lighting devices are now one of the most energy-efficient in the market. However, LED technology continues to improve and may eventually bring the end of the history of HID lighting.