Although Thomas Alva Edison and Nikola Tesla experimented with fluorescent lights back in the 1890s, they never produced any commercially viable versions of these lamps. We credit Peter Cooper Hewitt with laying down the blueprint for manufacturing fluorescent lamps on a mass scale and in an economically feasible way. This is where the history of fluorescent lighting begins.

Need help deciding if fluorescent technology is right for your lighting project? Our team of certified lighting experts is happy to help steer you in the right direction. Give us a call Monday-Friday 6AM-6PM MST at 1-800-983-1315 or tell us about your project in our contact form and we will get back to you during the next business day. 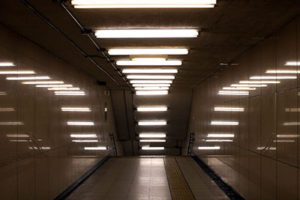 Fluorescent has long been a popular and cost-effective source of lighting. Source: Wikipedia

The workings of the arc-light are at the heart of the fluorescent lighting technology. Sir Humphrey Davy in 1801 discovered how an arc-light can be made to work. However, this lamp could not produce a steady stream of light. Next Charles P. Steinmentz, a German scientist, improved upon the model by developing a luminous arc that used magnetite instead of carbon.

French scientist Edmond Becquerel’s low-pressure discharge tubes filled with luminescent materials and powders most closely resemble the modern-day fluorescent lamp. However, his design was not practically feasible and could not be produced on a large scale economically.

Jablochkoff, a French engineer, improved upon the arc-lamp model. In 1879, he developed the electric candle that emitted light equivalent in brightness to several hundred candles. The electric candle was also used to light the Avenue de L’Opera. During the same time, an American engineer named Charles Brush also worked on improving the crude arc-lamp.

The above-mentioned bodies of work and products influenced the development of Hewitt’s mercury vapor lamp, the first prototype of today’s fluorescent lights.

According to the Smithsonian Institute, Hewitt’s work on his mercury vapor lamp is influenced by the Geissler lamp developed by Julius Plucker and Heinrich Geissler in the mid-19th century.

Peter Cooper Hewitt started working on mercury tubes in the late 1890s. He filled a long glass tube with mercury, pumped all air out of it, and sealed both ends of the tube. Wires attached to both ends of the tube supplied electric current. After switching on the current supply, the tube was tilted. As a result, the mercury formed a thread, broke, and emitted a glow that lit up the whole tube. The tilt-start method of lighting Hewitt’s lamp is shown in the diagram below.

Hewitt’s innovation is the first significant technological development in lighting that paved the way for modern fluorescent lamps. However, Hewitt’s tubes emitted a blue-green light that was not very attractive and thus, his invention was not considered marketable.

In the early years of the 20th century, Thomas Alva Edison and William Syme Andrews worked on their own respective versions of the fluorescent lamp that could produce a soothing light. Both of them used fluorescent material to coat the inside of the glass tube. But their designs proved to be commercially unpractical.

After a considerable lull, work on developing a commercially feasible fluorescent lamp began again in the mid-1920s. In 1926, Jacques Risler, a French engineer, developed a coating for the inside of a fluorescent light that absorbed the light produced by the mercury and produced a visible light with a soothing hue.

In 1934, a group of scientists at GE developed what we know of today as the fluorescent lamp. Those men -- led by George Inman and included Richard Thayer, Willard A. Roberts, and Eugene Lemmers -- had taken decades of knowledge and research from some of the most prominent scientific minds in history to ultimately produce a way for businesses and homes to have a new source of light that was longer lasting, better quality and -- as we know now -- provide both cost and energy savings over traditional incandescent light bulbs. The history of fluorescent lighting is a story of how they slowly take over use of incandescent technology.

The Fluorescent Lamp Continues to Improve

Since then, the history of fluorescent lamps has been a story of continuous improvement. For instance, the T-5 fluorescent lamps designed in the 1990s are 45 percent and 12 percent more energy-efficient than the T-12 and T-8 lamps, respectively. The T-5 lamps are 50 mm long and have a diameter of 16 mm. These dimensions make these lamps ideal for installation in small spaces like modular ceilings where they can illuminate a workspace below. This lamp also lasts longer than its predecessors. For instance, the T-8 lamps last an average of 15,000 hours while the T-5 lamps have an average lifespan of 20,000 hours.

In 1980, Phillips developed the SL line of fluorescent lamps with a screw-in base design and integral magnetic ballast. This was the very first screw-in lamp to replace the incandescent bulb. Subsequently, the pin-type tubular compact fluorescent bulb was developed to suit commercial lighting devices where the ballast is built into the fixture.

At either end of the glass tube are electrodes. These electrodes are wired to an electrical supply, and it is through those two electrodes that the electrical current -- or arc -- will flow when the lamp is turned on.

The glass tube is sealed and is filled mainly with an inert gas. Commonly the inert gas choice is argon, but other options include krypton, xenon or even neon. Also in the tube is a small amount of mercury vapor, about 4-5 milligrams worth, however manufacturers are constantly looking for ways to reduce the amount of mercury used in a fluorescent lamp.

The mercury is essential for the fluorescent lamp to make light because its atoms produce ultraviolet (UV) light at the wavelength necessary for absorption by the fluorescence in the tube to make it glow. As for the other inert gas, that acts as a freeway for the electrons made by the electrical arc, helping them travel to meet up with mercury atoms.

The Importance of the Phosphor Coating

On the inside of the glass tube is a coating of phosphors that have fluorescence capabilities, which is what gives a fluorescent lamp its glow. The phosphors are usually about 10 micrometers in size, which is the size for the best results. Phosphors that are larger can make for a weak coating, and smaller particles can result in poor light efficiency.

One last important player in the life of a fluorescent lamp is the ballast. This complimentary device is used to help regulate the amount of electrical current that flows through the glass tube from the electrodes. Without a ballast, the fluorescent lamp would take in so much power it would ultimately burn itself out.

Now that we know the main pieces of a fluorescent lamp, we can better understand how they all work together to create light.

How a Fluorescent Lamp Creates Light

The first step to making light with a fluorescent lamp is electricity. This electricity first passes through the ballast, which acts as a management tool for the power that goes into the fluorescent lamp. This keeps it from burning itself out. The amount of electricity to power the lamp will vary by the size of the lamp. It also matters whether the lamp is cold when turning it on, or if a starter switch will preheat it.

This arc of electricity now begins to warm up the mercury that is also inside the lamp. This causes the mercury to vaporize. As electronics and ions (aka charged atoms) flow through the vaporized mercury, they literally smash into the mercury vapor's atoms. This excites them and causes the electrons to move up to increase their energy level. When the electrons come back down to their normal energy level, they create UV light wavelengths.

This is where the phosphor coating on the inside of the glass lamp comes in. When UV light hits the phosphors, it stimulates their electrons, releasing light. This time it's a white light that we can see, and the fluorescent lamp is now on.

Once all the fluorescent lamp's components are creating light, the amount of electricity it needs to keep going is minimal. It is much smaller than what a traditional incandescent bulb uses, making fluorescent lamps an energy saving alternative.

The energy-efficiency and longevity of fluorescent lamps have gradually made them viable alternatives to the incandescent bulb. There is a huge variety of fluorescent lamps available on the market. This allows commercial space owners to choose the ones that exactly meets their needs and budget. The history of fluorescent lighting has seen the development of many lamp shapes. There are many lengths, circular tubes, and now compact fluorescent coils.