An Introduction to LED Lighting

Man made light is everywhere, to the point where light blocks out the visibility of the stars at night. Our city buildings glow with light, our houses twinkle in the dark, even our pets have blinking collars these days. We tend to take all of this convenient easy light for granted and do not realize the true hidden costs of light's exorbitant energy consumption. It is so easy to walk into our homes, flip the switch, and expect the lights to come on every single time. Yet the strain of energy demands from our outdated light sources are taxing our power grid to the max. There must be a way to combat the energy drain not only from our wallets, but for the good of the world we live in. This introduction to LED lighting will help you understand the newly most-popular lighting technology.

The solution to a large part of our energy problem has arrived. Efficient LED light technology is revolutionizing the way we will use light in our very near future. LED stands for Light Emitting Diodes which basically work by circulating electrons through a semiconductor. This relatively simple process of creating energy has a huge advantage over incandescent lighting technology. 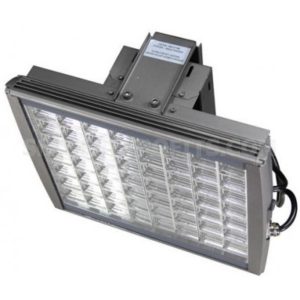 A high bay LED lamp meant for ceiling heights of 23 to 28 feet.

Expensive LED lighting is quickly becoming a thing of the past. One can now go to their local hardware store and pickup an LED light bulb that will fit into their standard light fixture for around $35. Yes, this does sound expensive when you compare the cost of an incandescent or CFL light bulb to the cost of an LED bulb.

However when you compare the savings on your electricity bill, it will be well worth the investment. An efficient LED light uses 10 watts of electricity to make the same luminescence of a 60 watt incandescent bulb. This is about an 85% decrease in power usage. Imagine if you changed every light in your house to an LED bulb. You will be saving 85% of electricity costs every time you switch on the lights. This will make a huge impact in decreasing your electricity bill month over month, year over year. Thousands of dollars will be saved for a few hundred dollars investment. Now that sounds like a bright idea!

In recent times the latest technology has been the CFL, or compact fluorescent lamp, bulb. We have all seen these curly cue light bulbs which last about 8 times longer than a standard incandescent bulb. These are much more affordable than the LED and with 10,000 hours of burn time you may decide to stick with this lighting technology.

However there are some facts about the CFL bulb that are concerning. CFL bulbs contain mercury which is known to cause brain damage and fetal defects. These bulbs are made of glass and although they are more sturdy than a flimsy glass incandescent bulb they can still break and shatter. CFL bulbs also take time to heat up to produce light and can be very hot to the touch. LED lights have none of these issues. LEDs contain no mercury, are usually made of plastic, are not hot to the touch; they hardly even generate heat.

Above all else, even though the CFL bulb does have many burning hours, the LED light beats the CFL bulb's lifespan by approximately 40,000 hours. The LED light also takes 4 watts less to make the same luminescence of a CFL bulb which is about a 7% decrease in energy consumption. Combine the longer lifespan and energy consumption decrease of an LED light and you will be keeping those dollars in your wallet, where they belong!

LED bulbs are not just for conventional and efficient lighting for our homes. They are diverse in many ways including shape, usage, and color. LEDs can be any color of the rainbow and can be programmed to fade in and out from one color to the next. Since the actual LED bulb is so small, they can be placed onto adhesive pliable strips which can line walls, ceilings, staircases, etc. LED lighting can be used to light up fish tanks, create glowing jewelry, and they can even be placed onto clothing. LEDs are also used for more common items such as car head lights, alarm clocks, watches, and toys. Chances are you have used an LED light in your lifetime.

LEDs in the Warehouse

LED lighting technology has a bigger picture than just for home and retail use. Their usage in industrial and commercial settings are changing the economical and energy landscape in a big way. Huge industrial plants use thousands of light bulbs to illuminate their large warehouses. Not only is it expensive to be burning so many bulbs, it is also expensive and inconvenient to change the bulbs when they burn out. Having such high ceilings in warehouses causes risk and time in changing burned out bulbs. Switching to LED bulbs in an industrial setting could save tens of thousands of dollars in energy costs and man power.

The hospitality industry can benefit greatly by changing to energy efficient LED lighting. Huge hotels with big glowing signs burn tons of electricity daily, and many of those lights have to stay on 24/7. Switching to LED lighting can be huge savings for hotels. Hotels can then pass these savings on to guests, and be a more affordable hotel with all the same amenities as their competitors. Bars and restaurants can illuminate with many trendy colors and have more control of dimming their lights without burning nearly as much energy.

The health industry is quickly catching onto energy saving LEDs. Many hospitals are already switching over to LED lighting in efforts to conserve precious budgets. This means more money is available for patients and hospital equipment. Hospitals can also benefit from the calming ambiance of LED lights which can soothe sick and nervous people in hospital beds.

One of the biggest changes to make with LED lights is the municipal consumption of energy. Imagine if every street lamp all over America switches to energy efficient LEDs. Now imagine how much energy consumption could decrease with just that one change. Imagine if all the police stations, court houses, Department of Motor Vehicles, city offices, etc. change over to LED lights. That could possibly save billions of tax dollars flowing from our pockets. All of these changes in our energy consumption could help get our country back on track and out of debt.

The bigger picture of the positive impact by switching to LED lights is enormous. Right now we are in a huge energy crisis by being virtually 100% dependent on fossil fuels. Approximately 70% of our electricity is comes from fossil fuels. Every time we turn on the light we are burning fossil fuels. We have become precariously involved with countries over our fossil fuel arrangements. The burning of fossil fuels is contaminating our air and is destroying our land. We have an urgent need to become independent from fossil fuels and one way to lessen our taste for oil is to engage in more efficient energy uses.

According to the Department of Energy, if we were to implement a widespread usage of LEDs in America, we could save 30 billion dollars in energy over the course of fifteen years. This could help America reduce its major debt bill year over year. Switching to energy efficient LEDs could lessen our taxation of our power grids which are becoming increasingly old and unreliable. We can be less dependent on foreign oil and coal power. This in turn can benefit our foreign relations with oil rich countries. All in all, LED lights can change the way our country, and the entire world, operates.

In whole, LED lights are going to be a big and bright part of our future. It will change the way we illuminate our lives. From the way we light our homes and cities, to how we power our businesses and industries. LEDs are a cool and creative way to create ambiance in spaces that we frequent. It can change the way our cities operate and how we spend out tax dollars. LEDs can change how we interact with each other, and how we interact with other countries. In my opinion, LEDs are one of the biggest breakthroughs since Edison invented the light bulb. This is a big deal for every person in every city all throughout the world. So, is it possible that one light bulb change the world?