LED Driver: What is it and how does it work?

LED technology is a completely different lighting method than other conventional lighting types. For one, LED's require an LED driver to control the electrical current. They often look similar to a fluorescent ballast but come in all shapes and sizes. Some are even hidden within what you might consider to be the "bulb", such as an A19 or T8 LED. 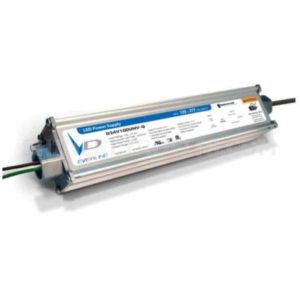 Although LED lighting has many great benefits -- including energy efficiency, long life, and environmental friendliness -- one of its potential disadvantages is that LEDs require a flow of consistent and constant electrical current at all times, at the exact voltage it requires. Doing this allows the LEDs to stay a consistent temperature. If an LED runs too hot, it may begin to malfunction and experience poor performance.

To help keep LEDs running in top form is where an LED driver comes in.

Click here to shop the selection of LED drivers on ShineRetrofits.com

What is an LED Driver?

An LED driver is a device that does exactly what it sounds like -- it drives the power to one or more LEDs.

As we mentioned previously, a good thing about LEDs is that they are energy efficient -- they do not require a large amount of power to get them going. LEDs actually work on DC power at a rather low voltage -- usually between 2V to 4V. Because of that, they require something that will convert AC into DC for them, and also will help keep them protected from any power surges that might occur, causing the LEDs to become overheated and become problematic.

The LED driver acts not only as an electrical current management system, but also as a protective buffer. It's like Baby Bear in the Goldilocks tale -- everything is just right.

As you look at the variety of LED driver products out there today, you'll notice there are two distinct types -- constant voltage and constant current. Both versions are for different things in different situations. It's important to read the product specifications of your LED lamp to make sure you are using the correct type. They are not usable interchangeably.

A constant voltage driver is used for LED products that require a steady and constant DC voltage to keep it performing well. Many times a constant voltage will be used with an LED lamp or other product that has a built-in driver for the current already installed. All it really needs is something to keep the voltage consistent. It is also mainly for applications where the LEDs are in a strip configuration and are all in a parallel connection to the driver. It ensures that every LED receives the same amount of voltage from the driver.

LEDs often use constant voltage drivers for illuminating landscape and accent lighting, back-lighting for advertising signs, and huge high-definition LED displays. Usually they are available in a number of different wattages, and can also come with dimming capabilities.

Rather than regulating the voltage, a constant current LED driver manages the actual current that comes in to the LED's diode that is required to get things jumping in the p-n junction. Additionally, this type of driver helps regulate the amount of forward current that can occur between the LEDs. This is a result of photon creation when the LED is on. Too much of this forward current can potentially overheat the LED, causing it to malfunction.

Important to note that in order to keep the entire string of LEDs running, you have to make sure you're providing enough voltage for the sum of them all. So, for instance, if each LED needs 2V to illuminate and you have 10 LEDs, they will require 20V.

Depending on their specifications, some LED drivers can also facilitate dimming and/or color sequencing.

Depending on the type of LED driver you select, their dimming skill can cover the full range. The driver dims the LEDs by either shortening the amount of leading current going through it, or by a method called pulse width modulation (PWM). Most drivers that offer dimming use PWM. This allows dimming without flickering and with usually very little color change in the LEDs.

It is good to note that dimming does not affect an LED's competence. It also will not have a negative impact on how long it lasts. In fact, dimming can potentially help LEDs last longer as it will reduce the heat it creates when lit.