Mercury Vapor Lamps: What are they?

All About Mercury Vapor Lamps 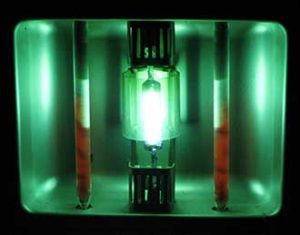 Close up of a mercury vapor lamp. source: Wikipedia

Mercury vapor lamps offer a number of benefits, including a relatively long lamp life when compared to traditional incandescents. They also have the capability of emitting very clear, intense white light. This has made them valuable for a number of applications throughout the years, including overhead lighting in big areas like factories and sports arenas.

As with metal halide lamps, advancements in lighting technologies – mainly fluorescents and LEDs – have begun to oust mercury vapor lamps from use. These new options offer longer-lasting light, energy savings, and a more environmentally-friendly design.

Here at ShineRetrofits.com, we want to make sure our customers have all the information they need to make educated choices about their lighting. To help with that, here's a look at just what mercury vapor lamps are, how they work, the pros and cons, and some other additional information to help you make the best decision.

What is a Mercury Vapor Lamp? 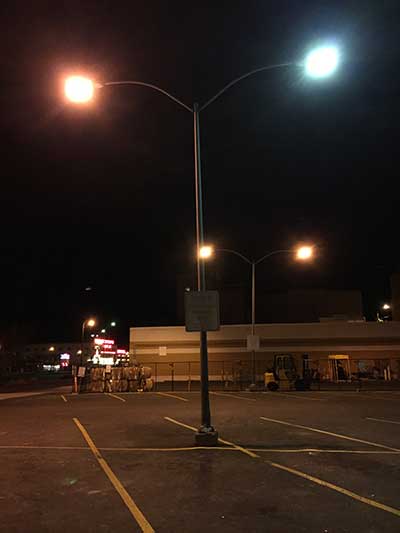 As we have already mentioned, a mercury vapor lamp is an HID lamp. That means that it uses an arc of electrical current that passes through vaporized gases. In this case it is mercury and it ultimately creates light.

The set-up of a mercury vapor lamp is similar to that of a metal halide lamp. The lamp uses an inner arc tube that is generally made of fused quartz. Fused quartz can go through major temperature changes without cracking, plus it won't melt at high temperatures. Halide lamps are a great choice for the tube that provides the electrical arc needed to get the lamp to light.

The inner arc tube is completely surrounded by an outer bulb, which is generally considered the actual lamp. The outer bulb can be clear, or sometimes coated with a phosphor. The job of the outer bulb is to keep heat in and help lower the amount of ultraviolet (UV) light emitted by the lamp. Plus, today's mercury vapor lamps are normally under high pressure inside, so the outer bulb keeps everything in and pressure to where it needs to be.

When electricity is provided to the mercury vapor lamp, an arc of electrical current passes from an electrode on one end of the inner arc tube to the other. This electrical arc is helped to flow through argon gas inside the bulb. Also in there is mercury, which is in liquid droplets inside the bulb. Once the electrical current starts, the inside of the lamp begins to heat up. This ultimately causes the mercury droplets to vaporize and mix with the argon gas inside. The mercury ionizes and light emits from the lamp.

To help keep the lamp going and make sure it does not use too much electricity, it normally includes a self-ballast to regulate the process.

History of the Mercury Vapor Lamp

The history of the mercury vapor lamp goes all the way back to 1835, when an English inventor and scientist by the name of Charles Wheatstone first started experimenting with what would happen when an arc of electricity was passed through mercury vapor. His experiments resulted in different colors being emitted depending when a prism was introduced into the mix.

Then a few years later in 1860 another Englishman -- John Thomas Way -- developed a very primitive version of the mercury vapor lamp. Later in 1892 Leo Arons of the University of Berlin also came up with an early version of the lamp. However, Arons lamp emitted light that had too much of a bluish-green tinge.

It wasn't until 1901 that a version of the mercury vapor lamp we know of today is an invention of American electrical engineer Peter Cooper Hewitt. On September 17, 1901, Hewitt received a US patent for his invention. Then two years later, Hewitt developed an upgraded version of his mercury vapor lamp that offered better light color quality.

One drawback of Hewitt's original mercury vapor lamp was the large amount of mercury that the lamp needs. In the 1930s, researchers worked to see if they could still use the same process, just with less mercury required. These newer lamps were ultimately made by companies such as General Electric.

Energy Efficiency -- When compared to incandescents -- and even some fluorescent options -- mercury vapor lamps use less energy and have greater luminous efficacies.

Long Lamp Life -- Generally speaking, mercury vapor lamps will last for at least 24,000 hours, with many lasting even longer. This makes them a great option for hard-to-get fixtures, such as in factories, sports arenas, and streetlights.

Phasing Out -- Probably the largest con to mercury vapor lamps is that the United States government is phasing them out as a lighting option. In fact, the passing of the Energy Policy Act of 2005 banned mercury vapor ballasts in the US. And the European Union is reportedly working to begin banning mercury vapor lamps as of 2015.

Blue-Green Light -- Due to the materials used to produce light in a mercury vapor lamp, the light it emits can sometimes have a very blue-green tinge to it. This has ultimately made these type of lamps a less desirable option for retail applications and other indoor uses. They can cause human skin color to look strange.

Warm Up -- Mercury vapor lamps require a lengthy warm up time. This can be anywhere from four to seven minutes.

Mercury Issues -- Like with other lighting options, the fact that mercury vapor lamps contain mercury has caused quite a concern for users. Because of this, disposal in not easy. The US Environmental Protection Agency (EPA) has specific rules on how burned-out mercury vapor lamps should be thrown away.

UV Radiation -- Another cause for concern is the fact that mercury vapor lamps emit UV radiation. Although the outer bulb helps to keep much of the radiation away from the end user, if the outer bulb was to break and the inner arc tube kept emitting light, the amount of UV radiation could potentially cause serious health risks for those exposed to it. 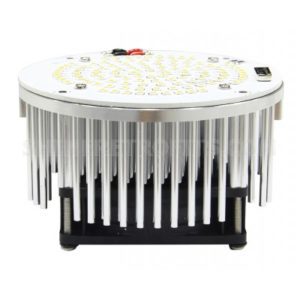 You can retrofit HID fixtures with kits like this one from Encore LED.

Ultimately the lighting choice you decide upon will be the best fit for your needs. We at ShineRetrofits.com just want to make sure our customers have all the information they need. This helps them to make well-educated decisions.

Here's a look at how mercury vapor lamps measure up to both fluorescent/CFLs and LEDs.

As we have already mentioned, mercury vapor lamps offer a lot of great advantages -- vivid light and long lamp life -- which has given them the nickname of "the workhorse" of lighting, making them great choices for places that need reliable lighting such as streetlights and sports arenas.

When compared to fluorescents and CFLs, these newer technologies do have major drawbacks when it comes to surrounding ambient temperature as they have a hard time operating in very cold areas, making them potentially not as great an option as mercury vapor lamps for outdoor applications.

On the flip side, fluorescents and CFLs do have certain characteristics that help make up for some of the disadvantages with mercury vapor lamps. For instance, fluorescents take much less time to heat up and emit light. Plus they offer even longer lamp life and greater energy efficiency.

It's important to note that switching to a fluorescent lighting solution does not do away with mercury. They still contain a small amount, and as such have their own disposal rules and regulations. 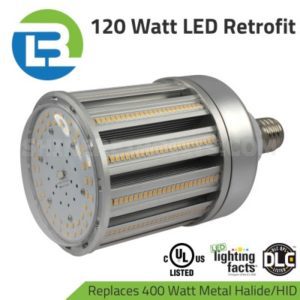 When compared to LEDs, the major advantage that mercury vapor lamps offer is cost. Although the cost of LEDs continues to drop, they are still much more expensive up front. They can sometimes be cost-prohibitive for contractors to fully use in a project.

Another potential disadvantage to LEDs is the fact that there really is no such thing as "white" LED light. White light is created through the use of multiple colors of LEDs, which is something mercury vapor lamps don't do.

However, an advantage of LEDs is the fact they are available in such a variety of colors. They are ideal for use in areas -- like retail -- that mercury vapor lamps usually are not. Other advantages LEDs offer are an even longer light life, better energy efficiency, and the fact they contain no mercury. This makes them environmentally friendly.