Lighting sensors: How can I use them to save energy in my warehouse?

Now that the old high-intensity discharge lights in many warehouses have fluorescents and LED replacements, facility managers are taking their energy-savings efforts to the next level and installing lighting sensors. You could have the most energy efficient lights on the market, but if they are burning brightly in unoccupied areas, or in rooms fully lit by natural daylight, you are wasting energy and missing out on significant utility savings. 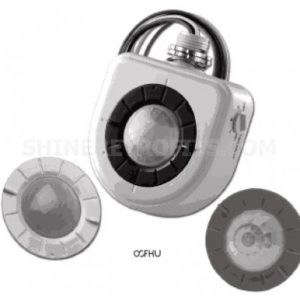 An occupancy sensor from Leviton.

One of the most common types of controls are occupancy sensors, which turn lights on automatically when they detect motion and then turn them off when the area is vacant. Along the same lines, “vacancy sensors” require occupants to manually switch on the lights when they enter a room, but as soon as they leave, the lights automatically switch off.

Sensors detect occupants in several different ways. Passive infrared sensors (PIR) are designed to respond to infrared light radiating from a person (or any other heat-emitting source) in their line of sight.  Ultrasound sensors produce low intensity, inaudible sound and detect changes in sound waves caused by motion. Because they are not line-of-sight dependant, these sensors are useful in hallways and bathrooms with stalls.

How To Install Occupancy Sensors

You can install occupancy sensors in various ways – wall-mount, ceiling-mount, corner-mount or on the light fixture itself. One of Leviton’s best-selling PIRs, for example, mounts directly to a high-bay industrial fluorescent fixture. It can be set at any time without requiring power to the sensor; time delay is variable from 30 seconds to 20 minutes.  And it automatically adjusts the PIR sensitivity as ambient temperature rises to increase detection of heat movement through the field-of-view.

In areas where people are doing work that entails small movements – computer or paperwork for example - the sensitivity of the occupancy sensing system should be as high as possible to ensure detection.  In hallways, body movements are not hard to detect, so the system does not need to be as highly reactive.

Daylight harvesting systems supplement artificial light with ambient light in areas where there is a sufficient amount of it available, such as near large skylights or windows. Although this is a manual process, automatic systems usually result in greater energy savings over the long run. In an automated system, optical lighting sensors called photocells read ambient light levels. They send this data to controls that raise or lower light levels to maintain a base level of illumination.

Another way to assure that lights are off when unneeded is through time-scheduling. Use a time clock or computer settings to turn lights on or off at a specific time. These systems work well in large open areas. They often include overrides that allow occupants to turn on the lights after hours.

Using any of the control systems above, light levels lower or shut off entirely when not necessary. In areas where safety and security is a concern, such as stairwells used for emergency exits, lights should never be off completely.  Here, an additional control can be built into the system. Using a dimmer will allow you to capture energy savings but keeps lights on at a constant low level when areas are unoccupied. When an integrated or separately mounted occupancy sensor detects that someone has entered the space, it signals the dimmer to raise light levels to full brightness.

Another alternative to shutting lights off completely is dual-switching, also referred to as bi-level or step-switching.  With this approach, multiple lamps in a single light fixture can switch on and off independently of each other. This allows for typically one or two steps between full and zero output.

Control systems can conserve energy in exterior applications. The Maxlite 14-watt LED wall-pack, for example, uses a dusk-to-dawn photocell. It eliminates the need to turn lights off in the morning. Most parking lot pole lights utilize photocells. Their program dims them down or shuts them off at a certain time of night. At building entrances and driveways, you can install motion detectors to turn flood lights on after dark when people approach an entrance to the building.  In all exterior applications, you will have to find a balance between conserving as much energy as possible and meeting safety and security requirements.

There are multiple benefits and incentives for installing control systems. First and foremost, they save a significant amount of energy, although exactly how much is difficult to quantify. Many factors come into play, including occupant behavior and the placement of windows and skylights. However, the Lawrence Berkeley National Laboratory analyzed 240 energy savings estimates from 88 papers and case studies, and came up with “best estimates” of average lighting energy savings for each strategy. The average savings for occupancy sensors was 24%, while the average savings for photosensors was 28%.

Controls also reduce maintenance costs, since dimming or turning lights off when they are unneeded prolongs lamp life.  Factor these “life cycle savings” into the equation when you tabulate your initial investment in a control system. That initial cost can also be reduced with the help of generous utility rebates. PPL, for example, one of the utility companies servicing Pennsylvania, provides a $45 rebate for fixture-mounted, remote-mounted and wall-box occupancy sensors. According to the Lighting Controls Association, the average rebate for photocells is about $28. The controls may be required to be listed by UL or other OSHA-approved testing laboratory to qualify. They often require pre-approval before you purchase the equipment.

Finally, lighting sensors, and daylight harvesting in particular, can contribute to the comfort of a work environment.   Studies cited in the GreenGuide published by the American Society of Heating, Refrigerating and Air-Conditioning indicate that greater use of natural daylight resulted in a 40% improvement in sales in retail settings. In school settings, increased daylight resulted in a 20% improvement in math scores and a 26% improvement in reading scores.  It’s not unreasonable to assume the same would hold true for industrial settings – so let the sunshine in.

Do you need help cutting additional lighting costs with the use of lighting sensors? Our experience and certified team of lighting experts is available to help Monday to Friday from 6AM-6PM MST at 1-800-983-1315. Or, fill out our contact form with a description of your project. We will get back to you within the next business day.