Should I Use LED Or Fluorescent Troffers In My Office?

LED or fluorescent, that is the question. Fluorescent troffers comprise a majority of the lighting in offices around the world, and can now be retrofitted with LEDs.

Although LEDs have been in use for some time now in applications such as industrial high bays, pole lights, wall packs, and high hats, it has taken a little longer for lighting manufacturers to put the finishing touches on LED troffers. These are the rectangular light fixtures that fit into modular dropped ceiling grids and comprise the bulk of office lighting. But there have been continual improvements over the past several years, and there are a number of excellent products now on the market. The decision to replace T8 fluorescents with LEDs in your offices, conference rooms, corridors and other general-purpose areas must be made on a case-by-case basis. Do this after a careful comparison of their respective performance, energy efficiency, and cost-effectiveness. In this article, we will help you decide whether to use LED or fluorescent troffers in your office.

LED or Fluorescent Light Fixtures – How they Work

Fluorescent tubes work by ionizing mercury vapor in a glass tube. This causes electrons in the gas to emit photons at UV frequencies. The UV light is converted into standard visible light using a phosphor coating on the inside of the tube. LEDs work in a very different way. Light-emitting diodes are semiconductor devices which convert electricity to light using the movement of electrons. Compared to older technology, this is an efficient process. More of the energy radiates out of the fixture as light and less as heat. However, the light-emitting diodes do warm up quite a bit for their size and this can shorten their life, so it's important to have a system in place to draw the heat away. Most LED fixtures accomplish this with a heat sink plate that moves the heat from the diodes into the air surrounding the tube.

One other component of the LED fixture is the driver, an electrical device that regulates the power to the LED and assures that it remains constant, much like the ballast on a fluorescent fixture. 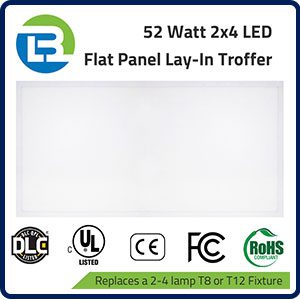 Troffers are now available with LEDs built in like this one from 3BL.

Correlated color temperature (CCT) indicates the color appearance of a light source, which can range from warm yellows and oranges to cold blues. Most linear fluorescent lamps range from “warm” light of about 3000 Kelvin (K) to “cool” light of about 4100K. LED’s have traditionally tended toward the blue spectrum. Lately though, they are becoming available in a wider range of temperatures. In addition, leading LED manufacturers like CREE have developed new methods to assure color consistency from fixture to fixture.

Color rendering index (CRI) measures the ability of a light source to faithfully reveal an object’s color. The higher the number, the more closely the product output resembles natural light. A “perfect” CRI is 100. Fluorescent lamps feature a CRI of up to 80, but many LEDs have this beat. CREE’s ZR24 LED troffer, for example, has a CRI of 90.

Both LEDs and super T8 fluorescent lamps are dimmable to offer energy savings. Although, fluorescents can only dim down to about 25% (below that they’ll stop working). On the other hand, LEDs can operate at very low light levels. The CREE troffer mentioned above, for example, has advanced 0 to 10V dimming capabilities.

LED or fluorescent for dimming? Choose the LED troffers.

We calculate luminaire efficiency by taking the ratio of troffer light output and troffer input power. This figure is expressed in lumens per watt. In other words, this measurement tells you how much light you’re getting out of that fixture for the power you’re putting into it. LED lights are more efficient than older technology because they turn more of the energy into light and less of it into heat.

As efficient as they are, however, most LED fixtures do not provide as much light to the workplane as T8s. The reason for this is that fluorescents deliver light over 360 degrees. The light that’s directed upward into the fixture is re-directed back to the work surface by reflectors. This is where we get the terms “direct/indirect fixture”. LED tubes, in comparison, are unidirectional, with a typical 120-degree light output. So even if they have higher efficiencies, the workplane light levels maybe lower. Except for the areas directly under the fixture.

That was the conclusion of the US Department of Energy's (DOE’s) latest report on solid state lighting. Released on May 1, it focused on the bare-lamp performance of 31 linear LED lamps as measured against T8 fluorescent tubes. DOE testing found that the new generation of LED lamps showed improved performance relative to previous tests, and some LEDs performed comparably to fluorescents in terms of efficacy, color quality, and power quality. However, none of the LED products could match the luminous intensity distribution (omni-directionality) and only a handful provided comparable lumen output.

The interesting thing is that in many cases, a room lit by LED troffers appears brighter, which could be due to its very high CRI. The time may come when our assessment of light quality may have less to do with the actual number of footcandles that reach the work surface than on the overall appearance of the light.

One complication that arises when you compare the lifetime of a T8 and LED tube is that they “expire” differently. T8 lamps burn out at the end of the life. This typically comes at 50,000 hours (although some of the newest models last nearly 80,000). LEDs, in comparison, just get dimmer and dimmer until they fail to emit enough light to be useful. This is generally at 30% below their initial output.

The speed that an individual LED loses lumen output relates to how hot it gets. That is a result of how much current goes through it. This is influenced by fixture design, which can vary greatly. A well designed LED luminaire that doesn’t confine the bulb too closely and provides a good heat sink could theoretically burn for over 100,000 hours before its lumen output drops to 70%. LED’s haven’t been around long enough to test that theory in a practical application. However, manufacturers like CREE are promising at least 75,000 hours.

LED replacement prices have declined in the past year but are still higher than for T8 fixtures. However, the better fixtures that are easy to service, run cool, and have a long useful life, may provide enough maintenance savings over the long-run to make up for their higher initial price tag.

So, if you want to know if you should use LED or fluorescent technology in your office space, we find more and more that LED is the best solution.