Electromagnetic Spectrum: What do I need to know for my lighting purchase? 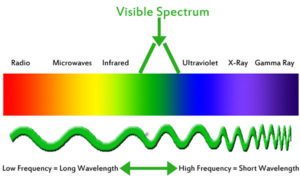 An illustration of the electromagnetic spectrum. source: Wikipedia

The electromagnetic spectrum refers to the range of all types of EM rays. These types of rays include radio waves, microwaves, infrared light waves, ultra-violet rays, X-rays, and gamma rays. These rays have different frequencies and reside at various points of the electromagnetic spectrum. Many electrical appliances that we use in our daily lives emit one of these rays.

For instance, the remote control of a television set emits infrared rays. Some rays like radio waves emit from astral bodies like stars while some “hot” bodies in the space, like the sun, emit ultra-violet rays. Not all rays are visible to the human eye. EM rays in a particular range of the electromagnetic spectrum emit light that human beings can see.

How does the Electromagnetic Spectrum Create Visible Light?

Human beings can perceive only a tiny fraction of waves in the electromagnetic spectrum. These electromagnetic waves are visible light waves and they emit from objects like light bulbs, stars, and fireflies. We perceive these light waves as the seven colors of the rainbow. At one end of this range is the color red with the longest wavelength. At the other end of the visible light spectrum is the color violet with the shortest wavelength. When all these light waves are present, we see white light.

That white light consists of seven different colors, as we see with this experiment. If you make white light pass through a prism, the light will separate into its seven components—red, orange, yellow, green, blue, indigo, and violet—and pass out of the prism in a rainbow of colors. The sequence, in which these colors are present in the visible light spectrum, in their reverse order, forms the acronym VIBGYOR. When passing through the prism, the color violet bends more than red because the former has a shorter wavelength.

In this context, it is worth noting that nowadays the color indigo is not actually a part of the visible light spectrum. This is because it is believed that this color or its frequency cannot be easily distinguished in the light spectrum. In fact, scientists find that some people with marvelous vision cannot distinguish indigo from shades of blue and cyan. So the acronym VIBGYOR is now actually VBGYOR.

How does Visible Light Help Us See Objects?

We can see objects and perceive the different colors on these objects because of the presence of visible light. The sun is a natural source of visible white light while light bulbs produce visible light artificially. The cone cells in human eyes perceive these visible light waves. When white light falls on an object, one or more of the component colors are absorbs in the object while some reflects. The color of an object as we perceive it to be is the color or the specific light wave that has not been absorbed.

In this context it is worth noting that we also see a lot of colors that are not in the visible light spectrum. That is, we see colors other than violet, blue, green, yellow, orange, and red. This is because the visible light spectrum contains only colors that have one wavelength. We call these colors, "pure colors". However, a number of different wavelengths can mix to give rise to other new colors. That is why the human eye is able to see colors like pink that is a variation of red or magenta that is a variation of violet.

Electromagnetic radiation can be measured and expressed using units of energy, frequency, or wavelength. The unit is frequency is cycles per second or Hertz. Energy is expressed in electron volts while wavelength is expressed in meters. We use different units to facilitate ease of expression.

The above-mentioned pieces of information regarding electromagnetic radiation, the visible light spectrum, and how human beings perceive colors help to explain the common physical phenomena that take place around us every day.