Dimmable LED Lights: How do they work? 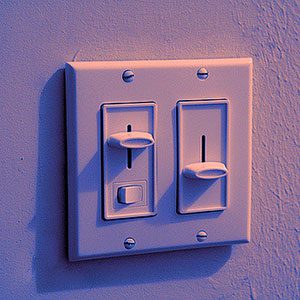 One of the advantages of LED lights is that depending on how they are configured, they can be dimmed. However, even dimmable LED lamps that say they are designed to dim might not work with certain dimmers.

Overall, it's always important to make sure to read the packaging. Or, check with the manufacturer to make sure the dimmable LED you are using have a dimming design. You never want to use a non-dimmable LED with a dimmer. It can greatly shorten the life of the lamp.

Here's a look at how dimming in LED lamps works and some options that are available.

Why Dim Your LED Lights?

There are quite a few positive benefits that a dimmable LED lamp can bring. First and foremost, being able to dim an LED lamp offers additional energy savings at about a 1:1 ratio. So if you can dim an LED lamp to 50%, that means it will only need to use about 50% of the energy it would normally need to illuminate. Plus dimming an LED lamp will allow you to possibly extend it's already long lifespan even further. It creates less heat and therefore less stress on the lamp's components. Over time, that can add up to a lot of savings!

Another benefit of dimmable LED lights is what they bring to the environment in terms of ambiance. Being able to dim an LED lamp gives you the flexibility to set the mood for any given situation. This can be very important in business and office environments where owners and managers want the ability to set the light brightness to the visual needs of their employees. And consumers also want the same ability they had with incandescent bulbs to make the light in their home what they want.

One potential issue with dimmable LEDs is that unlike traditional incandescent bulbs that almost always can dim down to about 1%, LED lamps have a much larger range -- anywhere from 5% to 20% -- that varies between manufacturers. That means you really have to do your research to make sure you're getting the appropriate dimming percentage you need for your project.

Additionally, even though an LED is dimmable, it may still have some issues. One known potential problem with dimming an LED is "drop out". This is when as the LED dims closer to its maximum percentage, it completely turns off. A similar issue can arise when you start to raise the brightness of the LED lamp from dimming. It may suddenly "pop on" to its full illumination.

Other potential LED dimming problems can also be flickering -- either constant or sporadic -- and an issue called "dead travel," which is the amount you can change the control before the light itself also changes. For example, if you slide a dimmer almost half way before the light itself actually begins to dim, that would be explained as a 50% "dead travel" for that dimmer.

And another potential issue to keep in mind is what the dimming may do to the LED driver. As we discussed in our article on LED drivers, LEDs require a driver to convert AC power into the DC power the LEDs need, and it keeps the power flowing consistently, offering protection from power surges that could cause the LEDs to overheat and fail. Sometimes dimming an LED can cause the driver to lose efficiency, which could lead to it not doing its job well in protecting the LED lamp.

There are two main ways in which we dim LEDs. There is pulse-width modulation (PWM) dimming and constant current reduction (CCR) Each type has its own pros and cons.

Pulse-width modulation (PWM) dimming works by turning the LED on and off at a very high speed. Although it actually ends up making the light flicker, it's so fast that the human eye doesn't notice. PWM works by using the exact amount of electrical current the LED requires. The process quickly switches between that current amount and zero. So either the LED is running on its necessary amount of power, or it's off.

A benefit of PWM dimming is that is allows the LED to be on for less time. This helps to lower its internal temperature and potentially adds to its lifespan. Another benefit is color temperature. PWM dimming keeps LEDs running at their rated electrical current level. The expected color temperature of a dimmable LED lamp does not change and stays constant through dimming.

A drawback to PWM dimming is the potential for some noise generation from the lamp. Some flickering can occur when not using the appropriate PWM frequency. Additionally, sometimes PWM drivers can generate electromagnetic interference (EMI), making them unsuitable for certain applications such as medical.

Constant current reduction (CCR) dimming is also sometimes known as analog dimming. As the electrical current that is necessary to illuminate the LED lamp flows through it, the current lowers to dim the lamp.

Again, CCR dimming can help increase the life of an LED lamp as a lower current equals lower heat generation, helping to decrease stress to the lamp's components. Additionally, CCR dimming does not result in any noise generation or flickering.

On the flipside, CCR dimming can sometimes have some issues with dimmable LED lamps at very low current or deep dimming levels. They may also sometimes result in slightly changing the color of the emitted light as the lamp is dimmed.