What is the difference between Direct Lit and Edge Lit LED Flat Panels? 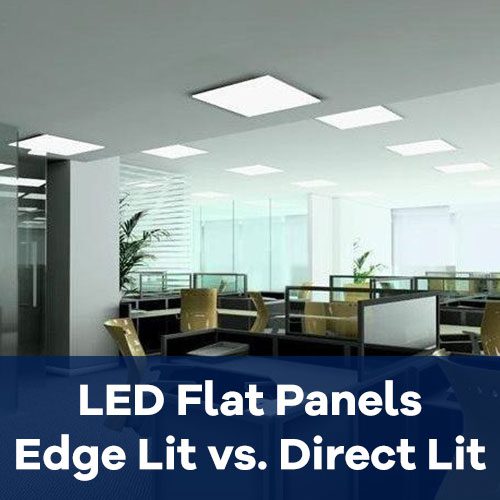 Direct lit and Edge lit LED Flat Panels are all the rage these days for retrofitting ceiling lighting. They are particularly ideal for replacing in-ceiling troffers, and they come in many common grid sizes like 1x4, 2x2, and 2x4. That is not all they are good for, though. New LED technology allows these flat panels to be manufactured very thin, down to a half inch. This means they can be mounted to walls and ceilings or suspended from cables. This new technology allows a versatility in lighting design that has not been available in the past, and can really open up the options you have for how you want to light your space.

When it comes to lighting a commercial operation or office building, LED flat panels can offer solutions to many different lighting problems. Once you try them out, you may find that you want to replace all your lighting with LED flat panels, and we wouldn’t blame you.

If you have been considering installing LED flat panel light fixtures then there are two main panel options you need to know about, and those are edge lit and direct lit. They sound similar, but there are actually some important differences you should definitely know about before making a purchase.

Before we go into the differences, it's good to know that both edge lit and direct lit LED flat panels are similar in that they use the same technology as LED flat screen TVs, which are another sector that has highly benefited from advancements in LEDs.

Now, the main difference that you need to know is that a direct lit fixture is illuminated by a light source that is at the back of the panel. For this reason, the direct lit flat panels are a bit thicker, usually around 3 to 4". Edge lit panels, on the other hand, produce the light from the sides of the panel. This allows them to be much thinner, around a half inch thick. The advantage of the edge lit LED flat panels is undoubtedly their thin size, which allows them to be mounted on a variety of surfaces, such as underneath cabinets or on concrete ceilings. 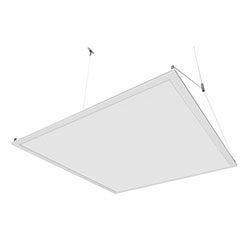 The effect of this light redirection is another reason that many people prefer the edge lit flat panels to their direct lit counterparts. The light dispersion creates an incredibly even light that has been deemed "shadowless". That is a bit of a misnomer since anything that blocks light will create a shadow. However, an edge lit flat panel throws light from such a broad area that the shadow is illuminated and does not appear.

For many offices and other commercial applications, these edge lit flat panels can be the perfect light source for their various spaces. The even, well-dispersed light allows work surfaces to be illuminated all across the room, which means you won’t get dark shadows where you can’t see what’s going on. This can be very helpful to employees that need to use every part of the space as part of their job.

Direct lit LED flat panels will look similar to an edge lit flat panel when mounted. However, when the panel is not mounted, you will notice the light source sticking off the back. The LEDs are housed there, and they shine on to a light diffusing medium that is at the front of the panel. Since the light source is all in one place (whereas it is all around the perimeter in edge lit), direct lit flat panels are slightly more energy efficient. They are also a bit less expensive per unit, reducing your upfront investment.

When you consider these cost savings, direct lit LED flat panels can start to look like a better option. Although they don’t produce that “shadowless” light that many people love about the edge lit LED flat panels, they still produce a consistent, powerful light that will effectively illuminate your commercial office building or manufacturing space. Plus, their increased efficiency means that large scale replacements of fluorescent troffers won’t break the bank.

When you consider the fact that many buildings are looking to replace the majority of their thicker ceiling troffers with more efficient LED flat panels, direct lit LED flat panels start to look like the better choice, at least from a purely monetary point of view.

When it comes to direct lit versus edge lit flat panels, the decision often comes down to what works best for your specific application. Some offices or commercial buildings might prefer the thinner design and lighting effect that edge lit panels offer. On the other hand, another company might not value these things, and would be perfectly happy saving money by choosing direct lit LED flat panel fixtures.

Alternatively, you can reach out to our customer service team. We can help you pick between edge lit and direct lit LED flat panels, or give you any other advice that will help you get the lighting that you need for your next project. Give us a call at 1-877-643-4534 anytime Monday through Friday, from 6am to 6pm, Mountain Standard Time. We can’t wait to hear from you and help you get your project off the ground!